‘Tis the week before Christmas and as the preparations are on, here’s some light fare on the topic. Countries around the world have their own rituals that they follow during this season.

In Sweden, the Yule Goat has been part of the Christmas celebration and dates back to ancient times. This tradition got a new lease of life in 1960s and from then on came to be referred to as the Gävle Goat.

The peculiar story about the Gävle Goat started in 1966, when someone came up with the idea to design a giant version of the traditional Swedish Christmas straw goat. The objective was to attract customers to the shops and restaurants in the southern part of the city. On the first Sunday of Advent 1966, the huge goat was placed at the Castle Square. Since then, the Gävle Goat has been a Christmas symbol placed in the same spot every year. Today he is world famous. The goat is the world’s largest straw goat and made it to the Guinness Book of Records for the first time in 1985.

A few facts about this goat.

▹ It takes a whole truck full of straw from the local village of Mackmyra to create the goat.

If you want to wish your Swedish friends for Christmas, it is easy.
Just say: God jul!

The Christmas rituals followed by other countries including Iceland, Austria, Norway, South Africa and El Salvador are explained here.

Then, there is food, glorious food. Again, there are foods that are traditionally prepared during the Christmas season and distinctive to each country.

In France, it is the famous yule log cake. 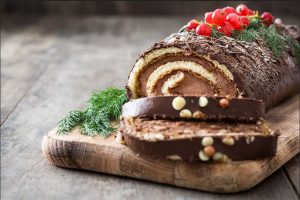 La Bûche de Noël is a dessert that symbolically represents the Yule Log – a wood log that was traditionally carried into the home, sprinkled with wine, and then burned on Christmas Eve. In the 1940s when the practice started to disappear, this dessert took up the mantle.

Often made from sponge cake and chocolate buttercream, la Bûche de Noël looks quite a bit like a real log.

Other variations of the dessert have emerged. Now you can find recipes for anything from tiramisu to cran-raspberry mascarpone, caramel cream to Meyer lemon.

Want to try making it? Here is the recipe.
Wishing any of our French visitors a Joyeux Noël!

Check out the foods from Germany, Costa Rica, Bulgaria, Greece and other countries.

This entry was posted in Faith, History. Bookmark the permalink.

4 Responses to Some Yuletide Traditions