History Is Us. There Is No Alternative.

If we wait for history to present us with freedom and other precious gifts, we risk waiting in vain. History is us—and there is no alternative but to shoulder the burden of what we so passionately desire and bear it out of the depths.

The country is in a despairingly bad state. There may be some who have already ditched it for greener pastures, while others are assessing their options. Many of those who are fighting to save the country are those who have fled oppressive regimes, and having found a free country, want to defend it.

In my introductory chapter to the CatWiki, I mentioned the route to change through educating and converting others. This wasn’t a task I was just preaching to an audience; it was a challenge on my list. I planned to act on it and had a target in mind. I got the opportunity to speak to the person and we initially chatted about various topics, including the virus. Then, I manoeuvred the conversation to politics. The lady told me that she no longer watched anything on that topic because they are all the same. She confided that she voted Liberals only because the other one is worse.

That was the cue I was waiting for. I explained to her that there is not much difference between the Liberals and Labor, and that the Liberals have been taking their voters for granted because they think that Conservative voters have no one else to vote for. I talked to her about the smaller centre-right parties and why we need to give them a chance. She understood what I was saying but was not motivated enough to do the research. I do not live in her electorate but I offered to keep a watch on the candidates and prepare a how to vote card for her, based on the way I would vote, if I was in her electorate. She agreed to that.

That is now a task on my To-do list. I will send her this card before the elections. What she does after that is up to her. I am hopeful that she will follow the list. I want to get on to step 2 – to get her to convert someone. This will be harder. How is she going to direct someone to another path, if she does not have the facts?  In her line of work, she comes into contact with several people. So I am thinking up ways to work out a solution.

I am also looking for other targets and opportunities to convert and plant seeds. I was chatting with someone in the shopping centre a few days ago, and heard a similar opinion of disgust with politicians. My response was that we should not vote for the major parties and instead give the smaller parties like UAP a chance, if for no other reason than to send a  message to the major parties.

When I comment or post something on this blog, I am not looking for recognition and applause from a wide audience. Popularity holds no attraction. Neither do safe spaces, echo chambers, or a warm fuzzy feeling with up-votes. Everything I post is on the one-person plan. I hope that what I share on the site will benefit just one person.
Depending on the content: if it is information through news items, then one reader has learned something from that comment; if it something of a reflective or analytical nature, it has made one person think and ponder; if it is something light-hearted, it has helped brighten one person’s day by putting a smile on their face. Just one person (could be a visiting lurker) gaining something, is the reward.

Naysayers will respond with: what’s the point? What difference will a change to one person’s mindset make?

All around the country there will be tens of thousands of people who feel that the situation is hopeless. The case is beyond repair. If each one stepped out of their cosy comfort zone and attempted one conversion, that would mean tens of thousands could, in total, influence thousands others.  And if the newly-converted were motivated enough to influence and convert those in their circle, that would add on thousands more.

Have we given up? Do we shrug our shoulders with the SEW philosophy:
Not me. Someone Else Will.

Change is possible. What do you do, if you want to make a difference too, instead of just giving up and shipping out?

Look around you and see if there are people who are unhappy with the current situation, but can’t see a way out. It does not matter if they are from the other side. Forget those who are completely brainwashed – they are gone. Focus on those who have an open mind, those who are prepared to listen, or those who are disillusioned.

All you have to do is to try to convert one person, to make one person see the need for change. Even if you cannot convert, you can plant a seed. Long after you have walked away, the person may think about what you have said. If it makes sense, they may take the next step.

What happens if you are in a situation where you only have a short time and can’t say much? Like in a shopping centre. Or on public transport. Or you don’t have the facts available to prove your case?

That is one of the reasons, I set up the CatWiki. It is meant to be a reference source, and I had hoped that others on the site would help to build it up, so we could get enough matter there. Even so, there is a fair bit of data in it, and if you do not have the time to provide details to the person, you could give them the CatWiki link. There’s information there on Covid, Climate Change, The Great Reset and Elections. It is a work-in-progress area with new details being added. On the Open Threads there is plenty of material, as well.

For people who have an open mind or those not happy with the status quo, even if they have so far been partly brainwashed by the MSM, it is possible that reading the information on the blog (some article or video or scientific paper) may trigger something in their intellect to make them doubt their previous misinformation via the main stream media or government sources. The CatWiki is made up of content from reliable sources: references, data, facts and evidence that can’t be easily dismissed.

Those who spend their time, like us, on alternative real news media sites and blogs like Catallaxy Files, take the facts for granted. It may be that there are some who get their news from MSM because they are not aware of the real news sources, and we need to lead them to these sites.

The Federal Elections, this year, may well be the most important in this nation’s history.  Each of us needs to decide if we are prepared to pay the price necessary to save this country; not just for ourselves, but for the generations to come. 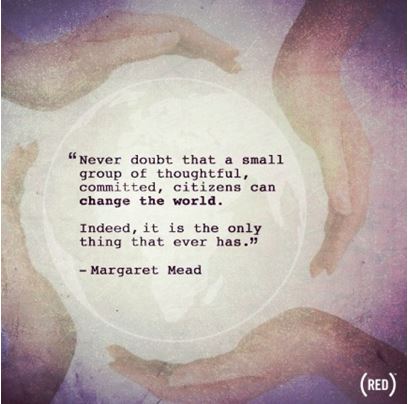 This entry was posted in Freedom, Government. Bookmark the permalink.

5 Responses to History Is Us. There Is No Alternative.